Our shop is closed until June 19, 2022. To contact us: contact@emmanuelleguyon.comm

It is a relatively fragile ore that shows some strong varieties with beautiful colors that are used in jewelry. You can find it under different shapes and colors: transparent or opaque, colorless, green, yellow, blue, pink, brown, grey, purple…

Its name comes from the Greek word “apatan” meaning “cheating” or “to be wrong”. Apatite refers to the Greek mythology goddess called Apate. This minor goddess, daughter of Nyx, is the personification of dupery, fraud, deception and dishonesty. It is one of the evils of Pandora’s box.

This name was given by the German mineralogist Abraham gottlob Werner. The reason is that the apatite stone an easily be confused with other ores. It is often confused with beryl, tourmaline, topaz or olivine. It is only at the endof the 18th century that its chemical composition was established.

The apatite ore is the main source of phosphore and phosphate. This concentration makes the main ingredient for a lot of fertilizers and cleansers. It is also the only ore you can find in human and animal bodies, inside the teeth and the nails. There is also a crystal bone made of apatite in the epiphysis endocrine gland located between the two hemispheres of the brain.

History, legends and beliefs about the apatite

As this stone was recently identified, there is no history about it. In spite of this, it surely has a long history but under the name of other best known stones. The first mention as a particular stone dates back to 1767 when the naturalist Pedro Francisco Davila identified a “phosphoric stone”.

We only found one mention about a stone coming from the mine of Logrosan in Estremadura in Spain. Known since the Antiquity, this stone (apatite) would have been used in the “cercon de las brujas” (the witch circle). It was thrown in the fire to get fluorescent sparkles.

Healing properties and benefits of the apatite

Healing properties and benefits of the blue apatite

Healing properties and benefits of the green apatite

Healing properties and benefits of the yellow apatite 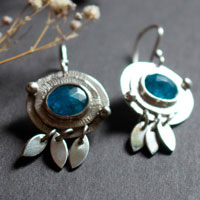 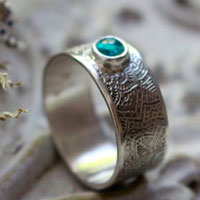