The fluorite is a mineral you can find in big quantities in nature.

Its name comes from the Latin word “fluere” which means “melting”, “which melts” or “which flows”.

The fluorite has been known since the Antiquity. The first description dates back to 1529 and was written by Georgius Agricola. It is in 1797 that the naturalist Carlo Antonio Galeani Napione gave it a name. He probably chose this name because of its use as a melting stone in the steel industry creating a bond between different metals.

The fluorite is composed of calcium fluoride and is part of the halides. Most part of the crystallization is cubic. You will find less often cuboid crystals.

In its purest condition, the fluorite is colorless and transparent. But you will be able to find the entire color spectrum due to the presence of impurities. It is often given the nickname of the most colored stone in the world. The most frequent colors are lilac to purple. You can find transparent, red, black, pink, brown, purple, yellow, blue, green… there are also multicolor examples. There are a lot of varieties which certain are fluorescents.

You can generally find it in the granitic rock veins. The biggest fluorite crystal would have been discovered in Russia with a height of 2.12 meters and 16 tons.

In the industry, it is mainly used to make hydrofluoric acid used in the work of aluminum. You can also find it in enamels, transparent glass and bezel glass.

History, beliefs and legends about the fluorite

This stone has always been appreciated because of its great variety of colors. In certain civilizations, some people thought fluorite was crystallized light.

Chinese people would have used the scarlet fluorite as a protection against bad spirits. The green fluorite would sometimes replace the jade stone in sculptures.

Egyptian people would use fluorite to carve pearls, scarabs and god statues.

It is probable that the Greeks used fluorine and its colors to make the famous Murrhins vases.

The Romans would have imagined that drinking alcohol in a carved glass of fluorite would avoid drunkenness. Some objects made of fluorine were found in the ruins of Pompeii.
It is after the conquest of Great Britain that the Romans would have started to excavate the famous “Blue John”, which is a peculiar blue yellow fluorite. The Romans were ready to invest important sums of money to get some. Pliny the old talked about the example of Neron who would have spent the equivalent of 240 000 dollars to get one stone.

In the Middle-Ages, it was named “ore flower'.

The fluorite was also used on the American continent. You can find sculptures dating back to the era of the builders from the Mississippi culture (900 – 1650). Some offerings were also found which were composed of pearls, pendants, earrings, and statuettes, all made of fluorite.

Healing properties and benefits of the fluorite

The blue color of waves 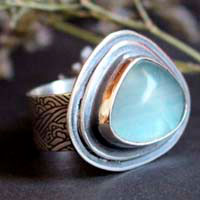