The larimar is a variety of blue pectolite that you can only find in the Dominican Republic and in Italy. The difference with the pectolite is due to the replacement of calcium by copper which gives it this particular color.

Its color varies from white to dark blue with different hues of blues. The most appreciated stones are the ones with a deep blue color. You can find some which are greenish or reddish but they are actually not used.

This stone appears by the pressure of gas in the chimneys of volcanoes.

The larimar is very sensitive to light and loses its color along the years.

It is sometimes called the Dominican turquoise, stone of Stefilia, the stone dolphin, the blue pectolite or the stone of the Atlantis.

Stories, legends and beliefs about the larimar

It is the priest Miguel Domingo Fuertes de Loren who would have first noticed this stone in the Dominican Republic in 1916. He asked for an authorization to excavate a mine but it was denied to him. The authorities could not figure out which mineral he was talking about.

It was not only before 1974 that the mine was found and it started to be excavated in 1976. It started with two villagers from Chupaderos who noticed the blue stone in the river and traced the course of the river to locate the mine. It was one of them who gave the name to the stone by associating a part of the name of his daughter, Larissa, with the Spanish word sea, Mar.
Nowadays, the mine of the Chupaderos is divided in two mountainsides; one is governmental and the other is for the local excavation.

The larimar is sometimes called the stone of the Atlantis because, according to the declarations of a prophet Edgar Cayce (1877-1945), the Caribbean islands and therefore, the Dominican Republic are a part of what was the Atlantide. About 30 years before the discovery of the stone, he announced that a blue stone would be found on one of the Carribean islands and that it would help curing people and would help communicating. According to him, this stone would be the foundation of the creation of the Atlantide…

Butterfly of the soul 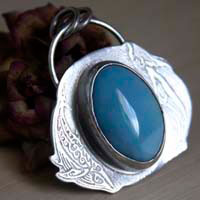 Consult our catalog of larimar cabochon