The sapphire is one of the four precious stones with diamond, ruby and emerald. It is a variety of corundum (aluminum oxide) that can be found in different colors, except for the red color that is referred as ruby. Sapphire is the strongest stone after diamond.

The name of sapphire comes from the Greek word sappheiros or "blue color stone" or from the Hebrew sappir or "the most beautiful thing". Some linguists say the word comes from the Sanskrit Santi Priya meaning "dear to Saturn" because in the Indian belief, sapphire was reserved to the Saturn planet.

At least until the 13th century, lapis lazuli was known as sapphire or sappheiros. This was certainly the beginning of bad interpretations and identifications of the stone in the course of history. However, Greek people would recognize quite well sapphire as they would call it huakintos which was the name given to the purple blue iris. It is only at the beginning of the 19th century that sapphire was identified and classified as a variety of corundum.

It can sometimes be called the oriental gem. However, in the past, there were several confusing names that were used for sapphire varieties such as the oriental peridot, or the green sapphire.

People will generally use the word of "sapphire" to refer to the blue color stone. Actually, the sapphire stone exists in other colors such as pink, yellow, orange, purple, green, black or transparent. The most famous and wanted variety in history is the blue one. Most of histories and legends about sapphire are only about this variety. This is what you will realize by reading this page.

The most wanted and rare sapphire is the Padparadja or Padparadscha sapphire showing purple pink or orange pink colors. These color variations are due to micro impurities in the sapphire. For example, in the case of the blue sapphire, you will find iron and titanium. The purple color is due to vanadium. The yellow color is due to the presence of iron. According to its density, it can show a green color.

Since the beginning of the 20th century, we know how to make lab created sapphires. The French chemist August Verneuil was the first to create one in 1902. They are chemically and physically identical to the natural stone. Lab-created sapphires are very resistant to scratches and are used to make watch glasses or camera lenses, for lasers etc… Because it is very resistant, it is also used for armored windows and bulletproof vests.

History, legends and beliefs about sapphire

As mentioned earlier, most of the legends and beliefs refer to the blue sapphire as it was the only one, which was identified as such.

Persian people would think that the earth would rest on a huge sapphire which reflections would give the blue color of the sky.

In Egypt, sapphire was considered as the stone of truth and justice.

Greek people already knew this stone since 480 AC. They would import it from Sri Lanka. According to a legend, it was Prometheus who would have stolen the sapphire to the gods, as well as fire at the same time.
Greeks who would go to consult Apollo's oracle would wear a sapphire. This stone was meant to help them better understand the answer. Indeed, the sapphire stone was also called "the jewel of the sun god", Apollo.

In the bible, this stone can be found in Exodus where it is mentioned as one of the stones of the throne of God. It would also be one of the twelve stones from Aaron’s breastplate symbolizing Issacar’s tribe. The sapphire is also one of the stone of the Celestial Jerusalem. The king Salomon would have worn a magical ring with a blue sapphire, which was a symbol of wisdom. It was known as Salomon’s seal. According to the story, it would have allowed him to give orders to demons and spirits, as well as being able to communicate with animals. He would have also used it to seduce the Queen of Saba. Abraham would have also worn a sapphire necklace as a talisman. According to some interpretations, the tables of the law that were given to Moses on the mountain would have been engraved in sapphire. Because of confusions, it is also possible that it was lapis lazuli.

For the Catholic Church, the blue sapphire is an important symbol. For the blue color is close to the color of the sky, it represents purity because its light looks close to the one of God’s kingdom. From the 13th century, cardinals used to wear a sapphire on the right hand, which was the hand giving blessings, as a symbol of faithfulness and closeness to God. Charlemagne was given a pendant called "Charlemagne’s talisman" made of a blue sapphire. This stone would have been given to him by the caliph Haroun ar-Rachid. It would hold holy relics and Charlemagne would have worn it as an amulet to show God his devotion.

The sapphire is also very important in royalty and aristocracy. It was often worn by kings, queens and by nobles. It was all about the blue sapphire which color would often symbolize royalty in Europe and most of all in France. The choice of the blue color for royalty would date back to the Capetian dynasty. At this time, the blue color was expensive to create and was also rare. It was therefore a symbol of prosperity for the nobility.

In the middle-ages, people would believe that sapphire had the power to preserve chastity and to reveal treasons and frauds. It would also protect against poisoning, the plague, of fevers and of skin diseases. It would have also allowed resisting to black magic. Sapphire was also used as a test of fidelity as it was meant to change its color if it was worn by an infidel. Beyond, it was considered as a defense against evil and jealousy.

Sapphire was mostly worshipped in Asian countries, and more particularly by Buddhists. This stone was reserved for Gods and was meant to create a desire for meditation and praying. It would bring peace and happiness.

In the long run, sapphire symbolized integrity, love and fidelity. It became quite popular for wedding bands. It really became a famous stone for wedding rings thanks to the sapphire ring Prince Charles offered to Lady Diana for their wedding. This atmosphere of royalty, of the charming prince and fairy tale inspired and launched a new fashion amongst women at that time who wanted to have a sapphire for their own wedding.

It is a gift you can offer for the 5th and 45th anniversary of wedding.

Sapphire is the birthstone for the month of September.

Big sapphires are quite rare and are often at the origin of myths and legends. Among the most famous sapphires, you can find the following ones: 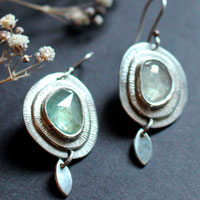 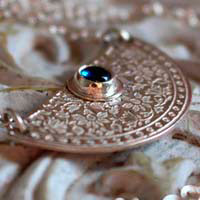 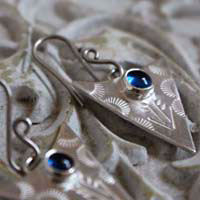 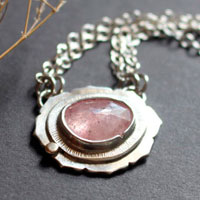 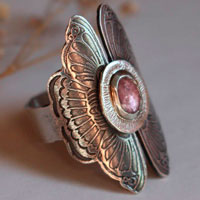 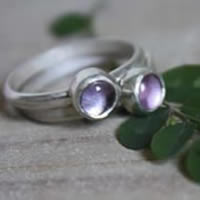 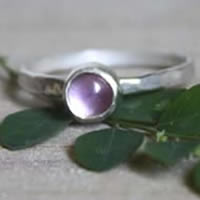 Sold
Lily pad under the rain 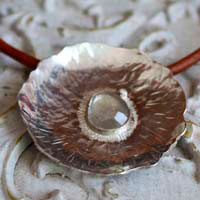 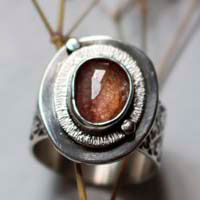 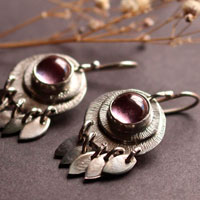